It goes without saying that Lightroom is a very powerful program. Over my short history with the program I’ve learned little bits here and there. Typically I only learn something when I need to use it which seems pretty normal, I guess. Early on I read in several different locations that you should apply the lens correction. The amount of noticeable corrections varies based on which lens I’m using but I can see why many recommend it.

But just below the lens correction in the Develop module is the Transform panel (see screenshot below). For a long while I never even expanded this panel to even begin using it. However, recently I took the next step and began to delve into the power that this feature provides. 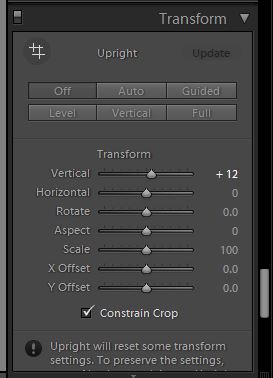 I will fully admit that my knowledge on this subject is very limited. You can make adjustments in many ways to the perspective of the image. There is a lesser-known way to make some of these correction in the camera but it would require the use of a tilt-shift camera. You can read more about it here. It’s a really neat trick but I don’t have the luxury of a tilt-shift lens in my bag.

Correcting converging lines wasn’t even on my radar when I first started shooting in RAW and using Lightroom. I would have taken a photo and just accepted the results that I got based on my given perspective. However, there was always that bug in the back of my mind that bothered me. I would go to length to make sure my horizontals were straight but based on my shooting angle I was unable to make orthogonal lines in real life have 90 degree angles in my photos. Enter the Transform panel.

The color image below was taken last spring, prior to my knowledge of the Transform panel. You can see how the vertical lines in the large tiles are angling in, particular towards the edges of the image. I can’t recall if I was looking slightly downward when I took the image but that’s what I got. Once I made a quick Vertical transformation I was able to straighten both the horizontal and vertical lines. You can see how much more pleasing the image looks. 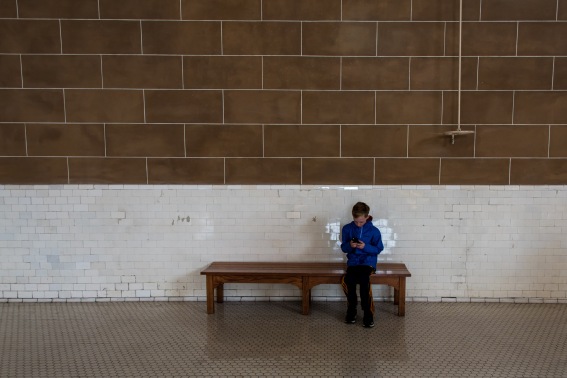 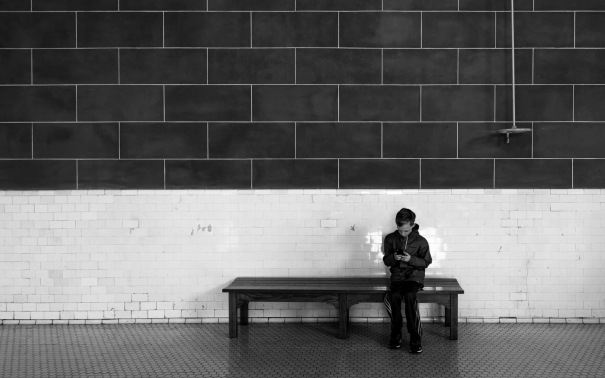 More recently while shooting the changing aspens in Colorado I found myself on a pretty steep hill looking up a great grove. The trees and the lighting were beautiful but as you can see with the image on the left the lines created by the trees have a strong converging feel, a little too strong for my taste. Using the Transform panel I was able to spread them apart a little. My perspective is still apparent but it isn’t as distracting in the final image on the right.

Basically, just take an extra minute and make some adjustments with the Transform panel. Clearly this isn’t a full tutorial on the power of the Transform panel but it hopefully gives you a taste of what you can do with it. Sometimes the difference between a good photo and a great photo are the small things, in this case removing the little distractions.

Please visit my photography site at www.stephenholst.com.
All images on this site © Stephen Holst. All rights reserved. Images may not be reproduced, distributed or modified without my written permission.
%d bloggers like this: